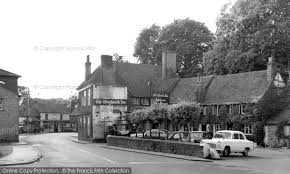 The Village is steeped in history and Horn Hill was originally meant to have been a model village and, where the Village Hall now stands, there were at the turn of the century, six picturesque cottages but without ‘mod-cons’. Mr H. D. Harben, the then Chairman of the Prudential, bought Newland Park and much of the adjoining land, farms, and above-mentioned six cottages.

On inspecting his agent’s book, he saw that one cottage was rented by someone and found it to be a young man who used it in the week-nights for a games and reading room for the youth of the locality and, on Sundays, for a Sunday School and evening service.

He refused to take more rent and said that he would build a suitable building for the Sunday work and a recreation room. It meant the demolition of the cottages, and, firstly, he built 12 cottages in three blocks of four higher up in Roberts Lane, and as a temporary measure, let the young man have a rent-free cottage he owned on Rickmansworth Lane. He intended making a model village of the whole area, but alas he died in 1910 before completion of the Hall. The Village Hall was being built on the site where had stood the six cottages opposite the small church – St Paul’s – a Chapel of Ease. 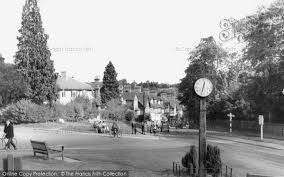 Mr Eric Harben, his son, had the Hall completed and he opened it in 1911. Mr Harben was a barrister and he drew up the rules for the running of the Hall. Unfortunately, the First World War made it impossible for Mr Harben to carry on living at Newland Park, so that the model village his father had envisaged did not come to pass.

So many people have wondered why such an outstanding building is found in such a rural setting, and one wonders what Horn Hill would have been like had Mr Henry Harben lived and had fulfilled his dream. The first 12 cottages were the beginning of the dream, and the Village Hall was and is a monument to his memory.

The village hall was formally a meeting place for young people and used as a Sunday School. It has also been a reception centre for evacuees from London, a school and a Library. The Hall was donated to the community in April 1948 and is run by a committee and trustees from the surrounding area.

In more recent years the hall has been in the coveted position to be used as a film set for some TV classics, including Midsomer Murders and Downtown Abbey.

If you’re a production company or Producer looking for a new location then we would love to hear from you. Contact Us

As part of the centenary celebrations on the completion of Horn Hill Village Hall in 1911, we decided to mark the occasion by burying a 100 year Time Capsule.

We asked all those who attend the hall to contribute and it was met with a resounding success. We were inundated with ideas and suggestions with the Time Capsule being buried, full of interesting items and artefacts that will be revealed in 2111.

Many thanks to all those involved and we hope it brings as much fun and joy in the next 100 years, as it did for all of us creating it.

Below is a full list of the items included.

With special thanks to all the committee members for their help in organising and making this special occasion and memorable one. Here’s to another 100 years at Horn Hill Village Hall.